Marvel’s Guardians of the Galaxy Unveiled

Developed by Eidos-Montréal in collaboration with Marvel Entertainment, The game combines original storytelling with electrifying single-player gameplay, it wouldn’t include an online mode, no downloadable content, or microtransactions.

Watch the first Guardians of the Galaxy gameplay video along with the reveal trailer in the player below!

“Fire up Star-Lord’s jet boots for a wild ride across the cosmos in this fresh take on Marvel’s Guardians of the Galaxy.

In this third-person action-adventure game, you are Star-Lord, and thanks to your bold yet questionable leadership, you have persuaded an oddball crew of unlikely heroes to join you.

Some jerk (surely not you) has set off a chain of catastrophic events, and only you can hold the unpredictable Guardians together long enough to fight off a total interplanetary meltdown.

Use Element Blasters, tag-team beat downs, jet boot-powered dropkicks, nothing’s off-limits. If you think it’s all going to plan, you’re in for a world of surprises, with the consequences of your actions guaranteed to keep the Guardians on their toes.

In this original Marvel’s Guardians of the Galaxy story, you’ll cross paths with powerful new beings and unique takes on iconic characters, all caught in a struggle for the galaxy’s fate. It’s time to show the universe what you’re made of. You got this. Probably.”

Synopsis:
“Twelve years ago, an epic conflict known as the Galactic War swept across the galaxy. Hoping to ditch painful memories by seeking new adventures and profit, the roguish Star-Lord brings together four other misfit heroes for hire to form the Guardians of the Galaxy.

On one of their first missions together, they search for a valuable monster in a restricted area of space filled with war debris. Their carefree approach to exploration culminates with a bet going spectacularly sideways, and they unwittingly unleash a chain of catastrophic events.

Now a mysterious corruption is slowly spreading all over the cosmos. Star-Lord, who left his space pirate life behind to live a (slightly) more honest one with the Guardians, decides his crew will step up when no one else will.

As they travel to find out who’s behind this corruption threatening to consume the galaxy, the bonds between the Guardians are tested at every turn. They wanted a fresh start and preventing intergalactic annihilation was never part of that plan. Every family has their battles but, luckily, this one fights better than most.

So, it’s down to the Guardians of the Galaxy to save the universe the only way they know how: full-throttle chaos until the last overpowered villain taps out. The stakes couldn’t be higher and the odds aren’t in their favour. What could go wrong?”

“The Eidos-Montréal team is honored to have the opportunity to work on such an iconic franchise alongside our trusted collaborators at Marvel Entertainment,” said David Anfossi, Head of Studio at Eidos-Montréal.

“Our teams are known for revisiting IPs and bringing their own twists and craft to the stories and the art surrounding them. As you will experience, it’s no different for Marvel’s Guardians of the Galaxy.”

“A distinct mix of sci-fi, family drama, and rock n’ roll attitude with an edgy aesthetic is the foundation for our Guardians franchise”, said Jay Ong, EVP, and Head of Marvel Games.

“We are thrilled to collaborate with Eidos-Montréal knowing they are the team that can deliver on this core promise. The team’s laser-focused vision for our beloved band of misfits shines in Marvel’s Guardians of the Galaxy. We are excited for our fans to play it this October.”

Master Star-Lord’s dynamic combat style to obliterate foes with his Element Blasters and call on the unique abilities of each Guardian to defeat a wild variety of interplanetary enemies. Also, as the self-proclaimed leader of the Guardians of the Galaxy, players will engage in select player-choice driven dialogue and interactions between Quill and the Guardians that further strengthens the bonds within this dysfunctional family.

The game will “wouldn’t be complete without a killer soundtrack to rock out to while soaring through space in the Milano. The game is jam-packed with classic 1980s hits and kicking original tracks.”

Influenced by the comics, this unique spin on the Guardians of the Galaxy will take players on a riotous journey across the stars as Peter Quill and the Guardians unintentionally become the galaxy’s first and last line of defense.

Marvel’s Guardians of the Galaxy will release simultaneously on the PlayStation 5, PlayStation 4, Xbox Series X|S, Xbox One consoles, PC, and streaming via GeForce NOW on October 26, 2021. 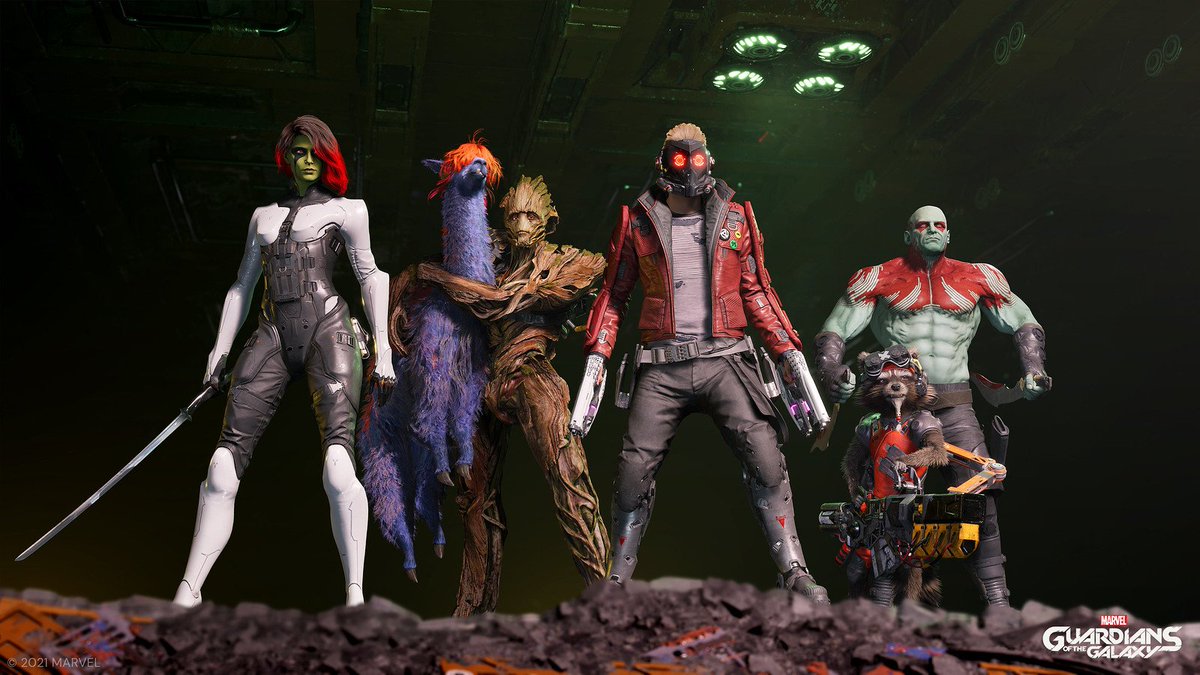