[Verse: Jack Harlow]
Back with the remix
These boys all my sons like Phoenix (Pooh, you a fool for this one)
My city and state never ever seen this
Jimmy Neutron, I’m a young boy genius (Oh Lord, Jetson made another one)
On the futon, I’ma give her that penis
When this shit’s done, I’ma fill up arenas
Ooh, like Gilbert Arenas, shoot my shot
I’m still with the demons, ooh, I keep it thorough
I got five chicks in New York
That means one in each borough
I’m in the pocket like Burrow
When I’m back home, though
They treat me like Robert De Niro
Took her to Taco Bell, bought her a churro
Took her home, gave her a cinnamon swirl
I left it in, now I got a one-year old
Zeros on zeros on zeros (Zeros)
That’s what my back account balance say (Woo)
I got a check from the shoe company
Now I do anything that New Balance say
I bought her a plane ticket, out of state
I got me a shorty from ’round the way
Said, “I’m in town today”
She said she comin’ over and she down to stay
I got a hit, she been playin’ that shit
So when she pull up on me I know what she ’bout to say

[Chorus: Jack Harlow & DaBaby]
What’s poppin’?
Brand new whip, just hopped in (Just hopped in)
I got options
I could pass that bitch like Stockton (It ain’t nothin’)
Just joshin’ (Oh, these niggas got me fucked up, nigga)
I’ma spend this holiday locked in (Ooh, you know, it’s like)
My body got rid of them toxins (Let me go, mmh, mmh)
SportsCenter, top ten

[Verse 2: DaBaby]
Call up my bitch, tell her, “Bring me that noggin” (Brrt)
Brain real good, she a scholar
I like the thing with low mileage, good brain with no college
Call me DaBaby, no toddler (Wah)
I’m real creative and stylish, F&N in my denim
I send a hit, make him spin ’em
And I just flew back from L.A. on the jet yesterday (Nyoom)
I go back and forth like I play tennis
I fuck with your ho, yeah, I’m fit for it
Still on the Billboard, the number one song and you can’t
And I done got so fuckin’ rich, all these hoes on my dick
I still don’t give a fuck what you say
She eat it like a Pac-Man, nigga (Eat it)
Whoop a nigga like I’m Batman, nigga (Eat it)
I just pulled up in the Batmobile (Nyoom)
The reason I ain’t fuckin’ with these rap-ass niggas
‘Cause they cap-ass niggas (Cap)
And they raps ain’t real (Cap)
Believe me, you wanna keep your life, then take it easy
I’m rockin’ water diamonds, need a Squeegee
These niggas watered down, they drinkin’ Fiji
My whip is orange and brown like I’m in Cleveland
My bitch is Mello Yello like a soda (Soda)
These niggas tattletalers, I’m a soldier
Ayy, somebody tell them niggas that it’s over
You know it’s Baby, nigga

[Verse 3: Tory Lanez]
Hop out that scat and I called her
I’m out here with somebody daughter
She callin’ me daddy, I’m somebody father
I gotta go gets it, I will not go kiss it
Or put my lips on it like somebody water
The diamond, the glacier, the cut, it all wylin’
She pulled up to fuck me but nobody caught her
She told me that she wasn’t feelin’ my music
I fucked her, she told me, “It’s nobody harder”
And I with the chiefski, I need that shit for the freeski
We are not buyin’ no pussy you sellin’ on Peachtree
It’s so much work on my celly
I had to go tell all my bitches, “Email it to reach me”
All in my DM, I’ll follow your BM
She play with the croski, we used to fuck on the lowski
She use to lie on my bed and go lie to your face
And say I’m just a broski (Hahaha), nigga, you knows me
You ain’t believe it, you wanted to toast me
I had extendi as long as a ruler in case you was coolin’ and wanna approach me
Dropped the Bentayga, came back in the Cullinan
She wanna fuck again, I want that tongue again
Stuck it so deep that she cough up her lung again
Five star bitches, they on the run again, run again
Runnin’ in diamonds, they illuminatin’ the way that I come again
I just put so many pennies on the watch
That I don’t ever got to stunt again, nigga, lil’ Tory

[Chorus: Jack Harlow]
What’s poppin’? (Poppin’)
Brand new whip, just hopped in (Just hopped in)
I got options
I could pass that bitch like Stockton (It ain’t nothin’)
Just joshin’
I’ma spend this holiday locked in (Ooh)
My body got rid of them toxins (Mmh, mmh)
SportsCenter, top ten

Produced by Pooh Beatz and jetsonmade. 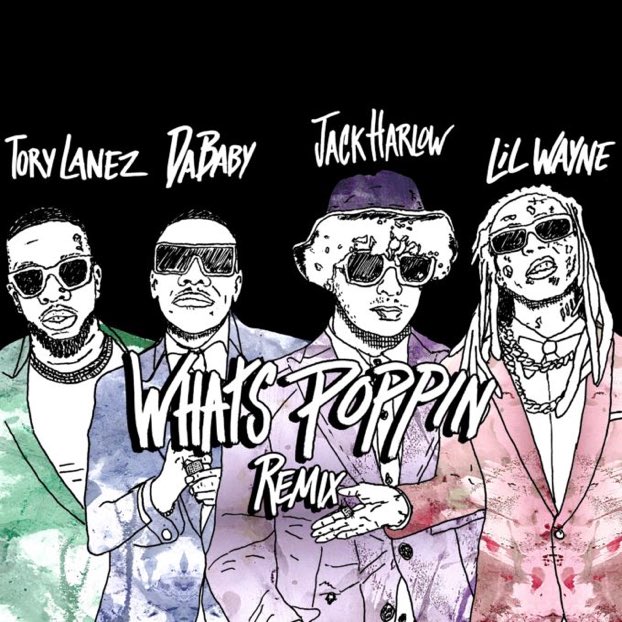