Killer is a song by American rapper, Eminem from the deluxe edition of his eleventh studio album Music to Be Murdered By.

Listen to the track in the player below followed by Killer Remix lyrics!

[Chorus: Eminem]
Now count it, five, ten, yeah, fifteen, twenty
Twenty-five, thirty, yeah, get the money
Throw it in the furnace, yeah, this shit be funny
Earn it just to burn it, swag drip—

[Verse: Jack Harlow]
I used to rock a toboggan
Headphones around my neck, tryna be like Shady
Now the phone that’s in my pocket seem to keep vibratin’
I got all these Ronnie Bennetts tryna be my baby
Tryna fiancé me
I take the steering wheel and drive them girls beyond crazy (Crazy)
I’m on a song with my idol
I’m a cold-blooded version of the song title
I put these diamonds in the ring like they was Shawn Michaels
I can’t put the Louis V inside the wash cycle
I take this shit to the cleaners
‘Bout to cop me a Bimmer, I got a special demeanor
She was mine when I seen her, I’m gettin’ meaner and meaner
Called the front desk and asked for a steamer
I’m a bitch bagger, not a Twitch streamer
I’m eatin’ pizza in Little Italy, damn, I used to hit Caesars
She ’bout to finish, but wait a minute, it gets deeper
Same kid just a bit sleeker

[Chorus: Eminem & Cordae]
Yeah, now count it, five, ten, yeah, fifteen, twenty
Twenty-five, thirty, yeah, get the money
Throw it in the furnace, yeah, this shit be funny
Earn it just to burn it (Listen, uh)

[Verse 2: Cordae]
They say my killing’s horrendous, “How he still in the business?”
Rich as hell and it’s feelin’ tremendous
Ma dukes chillin’ in Venice, compliments of her eldest descendant
Give hell with these writtens, this shit only propel my ascension
I held my position in any situation that’s needed
This year I’m shittin’ on niggas for the way we was treated
I see the impact of all my creations increasin’
My step in time with these Pantheons, it all was divine
I’m in this moment of my life where shit is fallin’ in line
And lookin’ back, I swear to god, you’d think it all was designed
A true movie script, I can’t really ever fuck no groupie bitch
All she got is diamonds on her mind on some Uzi shit
A whole generation of geniuses I’m influencin’
I only hang with real niggas who I’m congruent with
I manifest nothing less than the best outcome
Just watch my moves with this next album, nigga

[Chorus: Eminem]
Now count it, five, ten, yeah, fifteen, twenty
Twenty-five, thirty, yeah, get the money
Throw it in the furnace, yeah, this shit be funny
Earn it just to burn it, swag drippin’ from me

[Verse 3: Eminem]
My sentences are harsh, every single’s bar’s like a verdict
I say it with conviction, but this time you’re not gonna serve it
But as soon as I read it, you know that you’re about to get murdered
When I cap, it’ll punish, then put you in a box like a juror (Haha)
If there’s a rapper I haven’t ate (Where?)
We ain’t battled, either that or they won’t collaborate
‘Cause pad or paper freestyle will settle that debate (Yup)
I call it guillotine-style ’cause even off the head, I decapitate
Yeah, bitch, I go harder than Carter III (What?)
But I think your thottie just thought of me
She got a body and bottom like Cardi B
And she be stalking me like I was broccoli
I’m getting brain now like a lobotomy
You probably thinkin’ you had that shit in the bag like it’s colostomy (What?)
It’s a red alert, you better skrrt or try to get on my level first
Bitch, I’d had to shovel dirt and dig a hole to get on yours
You bum-bum (Haha), look at your broke ass (Yeah)
It’s why you’re a bum-bum (Why?) ’cause your shit is so ass (Yeah)
Syllable gun-guns (Chk-chk), spits and goes “Hadoo” (Doo)
Only L that I ever took was when I lost Proof (Yeah)
Only time that I ever got served is that lawsuit when Ma sued (What?)
But, bitch, get out of pocket and I might accost you (Accost you)
Homicides up the wazoo
(Chain) Chain gaudy, probably got more bodi-odi-odies than John do (John do)
Just called Snoop and I talked to him (What?), we all cool (Yeah)
Dre, me and the Dogg good, Doc, we got you
Got a castle with a solid gold floor (What?)
No I don’t, I don’t even got a boat nor
Do I got a chauffeur, but a lot to show for
You don’t wanna fuck around and start no war (Nah)
Twenty more years, I could probably go for
Just like your lip and you got a cold sore
My shit is like motherfuckin’ herpes
You ain’t ever gonna say I don’t got it no more (Bitch)
Literally, it’s no quittin’ me, you kiddin’ me?
Dying laughing is the only way you’re killing me
I’m getting rid of ya, get clapped like chlamydia
The wittiest, bitch, I’ll snap like a tibia
You wanna get silly with the bars? I’m frivolous
But I’m as gritty and litty as my city is
Eastside ’til I die, bitch, I will rep ’til the end like a chameleon
Got a killer instinct with the pen’s ink and they’re in sync like a faucet
How the fuck do I even think of this ridiculous shit?
I’m a quarter of a century deep and I can’t be beat (Nah)
‘Til the day me and the grim reap meet, I’m ten toes down ’til I’m six feet deep (What?)
Windows down in the Benz E jeep hollerin’ at a bimbo, beep-beep-beep
She said she fucks with the M-T-B to the M-B: Side B Slim CD
I can see why you envy me, you get no ass like an empty seat (Haha)
So this shit comes with a warning for all of you punks and you corny
Little fucks, I woke up on my fuck shit this morning

[Chorus: Eminem]
Now count it, five, ten, yeah, fifteen, twenty
Twenty-five, thirty, yeah, get the money
Throw it in the furnace, yeah, this shit be funny
Earn it just to burn it, swag drippin’ from me

Produced by D.A. Got That Dope.

Music to Be Murdered By is the eleventh studio album by Eminem, released on January 17, 2020, by Shady Records, Aftermath Entertainment, and Interscope Records. On December 18, 2020, he released a deluxe version of the album, titled Music to Be Murdered By: Side B. It includes the original album’s 20 tracks along with 16 new ones. 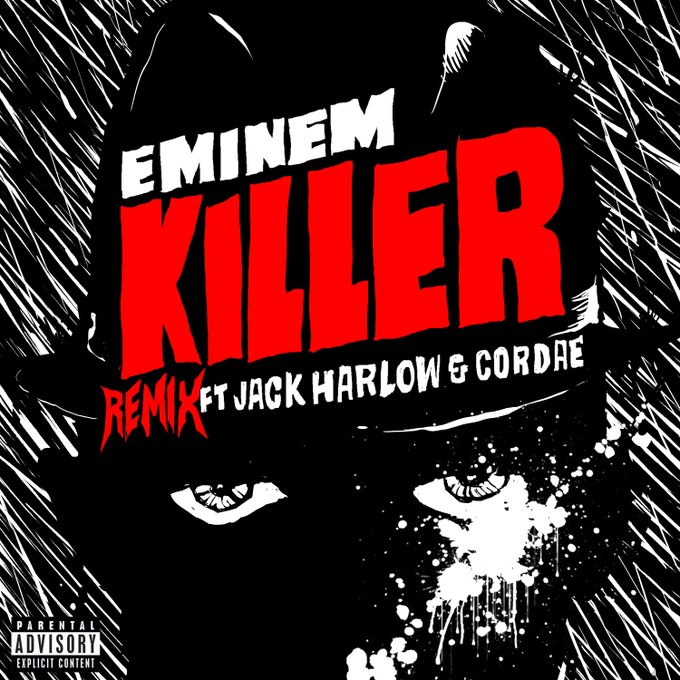