BioShock: The Collection Rated In Brazil

The Brazil Advisory Rating Board has rated BioShock: The Collection for PC, PlayStation 3, Xbox 360, PlayStation 4, Xbox One. 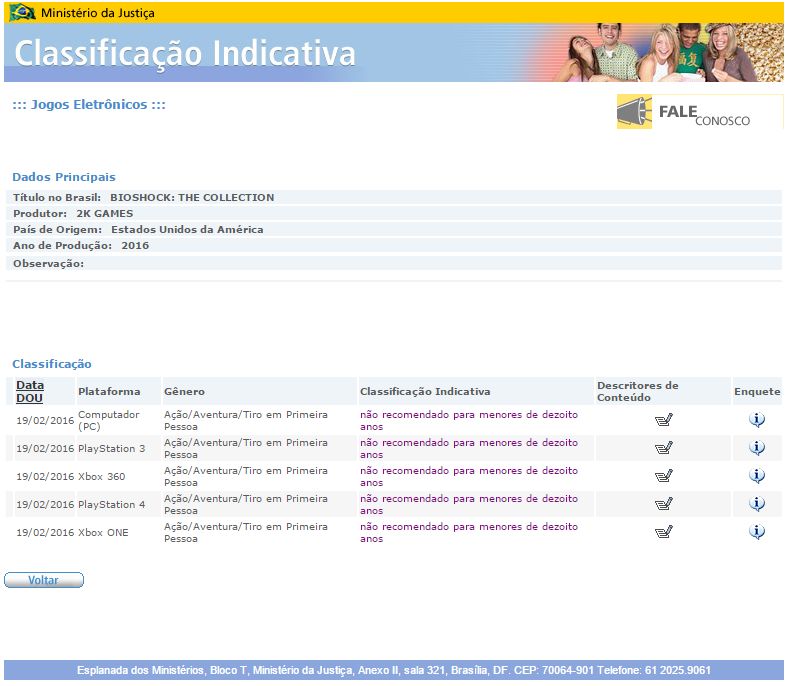 The series consists BioShock, BioShock 2, and BioShock Infinite on PC, PS3 and Xbox 360.

The Collection would be the first time a BioShock game appeared on PS4 and Xbox One.

The three games combined have sold over 25 million copies.

BioShock takes place in 1960, in the fictional underwater city of Rapture. Built in the late 1940s by business tycoon Andrew Ryan, it was meant to be a laissez-faire utopia for humanity’s elite to work, live, and prosper out of the increasingly oppressive hands of the world’s governments and authorities.

BioShock 2, a direct sequel to BioShock, taking place about ten years before and eight years after the first game. The player controls Subject Delta, one of the first Big Daddy test subjects who was abandoned by its creator. Continuing through the remains of Rapture left after the first game, Subject Delta must come to understand his origins and fight through the cult created by Dr. Sofia Lamb created in the power void left after BioShock to prevent a threat to the surface world.

BioShock Infinite takes place in 1912 in Columbia, a city suspended in the air through a combination of “quantum levitation” and giant blimps and balloons. It was built and launched in 1893 by the American government, during the Worlds’ Fair in Chicago, to much fanfare and publicity.

However, it was later involved in an “international incident” by firing upon a group of Chinese civilians during the Boxer Rebellion. The city was disavowed by the United States government, and the location of the city was soon lost to everyone else.

2K Games is yet to officially announce the collection, stay tuned!